An investigative report into the U.K.’s online identity verification program by Comptroller and Auditor General of the National Audit Office

This investigative report examines the performance and costs of GOV.UK Verify to date, the program’s decision-making, and the implications of the government’s decision to stop funding Verify in March 2020.

GOV.UK Verify is the U.K. government’s online verification system for its online services. The Cabinet Office announced in October 2018 that the government will stop funding the program in March 2020 with the intention that the private sector will take over responsibility.

Written by the National Audit Office, the U.K.’s independent Parliamentary body that scrutinises public spending for Parliament, the 32 page document covers Verify’s performance and benefits, costs and funding, and guidance for decisions on the program’s future.

The investigation provides a complete history of the program to date, including a timeline of key decisions, and gives frank analysis and recommendations.

In the concluding remarks, author Sir Amyas Morse KCB states: “In many ways the Verify program is an example of how government has tried to tackle a unique and unusual problem, adapting over time in response to lessons learnt and the changing nature of the external market. Unfortunately, Verify is also an example of many of the failings in major programmes that we often see, including optimism bias and failure to set clear objectives.”

For those interested, you can reference the Audit Office’s investigative approach and standard-based identity proofing included as an appendix. 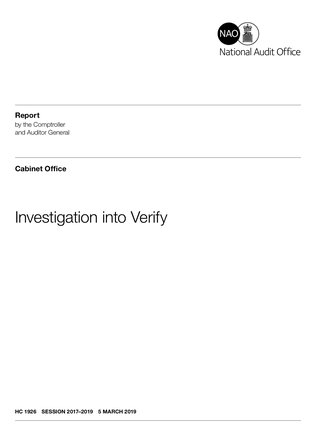