This report from the World Economic Forum (WEF) and the International Trade Centre investigates the potential of e-commerce as a force for sustainable development in Africa, and provides an action plan for reaping the benefits of sector growth.

Amongst these potential benefits are improved employment prospects – online market places are set to generate 3 million jobs in Africa by 2025 – and improved gender parity as female entrepreneurs enter into the workforce using digital services.

However, the report also notes several potential barriers to Africa’s e-commerce growth: “Although some e-commerce strategies and policies are at play, Africa falls behind on adopting key regulations, and legal uncertainty exists on multi-jurisdictional issues.” Key issues highlighted by the report include e-transactions, privacy, consumer protection and digital identity.

The authors continue: “According to some estimates, emerging economies stand to gain US$3.7 trillion in GDP by greater use of digital finance, yet only 34% of African adults made or received a digital payment in 2017. Despite increased digital visibility in neighbouring markets, intra-regional and global e-commerce trade remains small.”

In response to these barriers, the report outlines eight priority actions that need to be taken by Africa’s policy leaders and the international development community in order to reap the benefits of e-commerce growth on the continent.

The actions recommended by WEF include: refreshed digital trade and economy policies; universal and affordable internet access; improvements to related infrastructure and technology; interoperability between international e-payments services; investment in the tech sector; coaching for start-ups; and financial support for digital trade activities in Africa.

The report concludes on an optimistic note:

“Given that seven of the ten fastest- growing internet populations in the world are in continental Africa, mostly due to smartphone use, e-commerce barriers have every chance of being overcome. It is a critical moment. With action, e-commerce can become a driving force for sustainable development.” 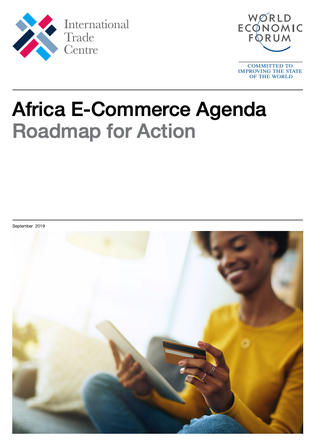